What is Downtime Cost? [Defined with Examples] 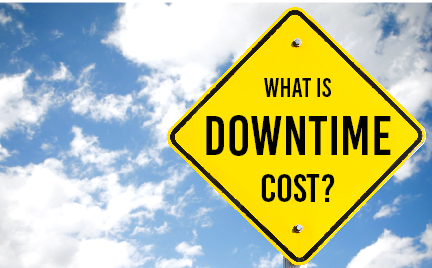 If you're an office manager or hold a similar role within your company, you may have seen several articles highlighting the costs associated with downtime. Like many people, you may not be sure of what downtime costs really are, so you Google:

"What is downtime cost?"

To answer that question, we have to first define downtime.

According to businessdictionary.com, downtime is defined as:

A period during which an equipment or machine is not functional or cannot work. It may be due to technical failure, machine adjustment, maintenance, or non-availability of inputs such as materials, labor or power. Average downtime is usually built into the price of goods produced to recover its costs through the sales revenue. Opposite of "uptime." Also called "waiting time."

In manufacturing, downtime is often very straightforward. Machines inevitably have mechanical failures and stop working from time to time, ultimately resulting in periods of downtime. But did you know that downtime can occur in nearly every industry?

An example of how downtime exists in the service industry could be the following:

Your business is a staffing agency for managed IT services companies in Atlanta. Most of your interactions with customers are through email or online form submissions, but you still have a phone number for employment seeking clients who wish to call.

Your business phone system is connected through the company's internet connection, so when your company's network goes down, so does every practical form of communication to your clients. All of the sudden, your company is temporarily out of business.

If you are a larger company, you may be able to withstand the occasional downtime, but smaller companies often discover the damage is crippling.

Downtime costs are not necessarily out-of-pocket costs. Instead, they are an estimation of the money lost during the downtime. This includes the obvious business transactions that can't be made (prospects that may go elsewhere or communication that can't transpire effectively, creating a backlog).

Unfortunately, this type of downtime is very common for companies, and a study conducted by the Ponemon Institute and commissioned by IBM discovered that these costs can be staggering.

READ: The True Cost of Downtime

What Did We Learn?

Downtime costs are a very real threat to any business. Any cost related to workday company functions and producing revenue becomes a "downtime cost" when your equipment or network ceases to function properly.

Sadly, we see this often at SOS from businesses that wait too long to protect themselves from preventable downtime. Unfortunately, companies often wait to seek help until after they experience downtime. The result is a regrettable expense to the company in an effort to get back up and running.

...an expense that can result in a company's doors closing and never reopening again.

The True Cost of Downtime
How Much Do Managed IT Services Cost?
Superior Solutions: for IT on a Budget