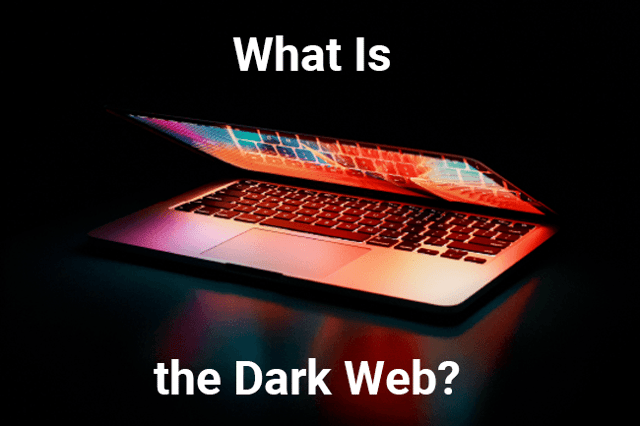 The Dark Web sounds like a scary story made up to keep children from wandering onto risky websites. Rumors surrounding its contents have been speculated for years, spinning tales of black market organ sales and drug trafficking. But what exactly is the dark web and what is it used for?

A perpetual rumor floating around about the dark web is that it operates on a scale 400-550 times bigger than the publicly accessible Internet. In actuality, these scaremongering rumors confuse the dark web with the large yet mostly benign deep web. Though the dark web isn't as big as the deep web, it still serves as a host for criminal activity.

In this article, we'll break down what the dark web is, what it's used for, and how you can keep your personal information off of it.

Not a lot of time? Jump to what you need:

What Is the Dark Web?

Why Do People Use the Dark Web?

How Can I Keep My Information Off the Dark Web?

What Is the Dark Web?

The dark web is a conglomeration of websites that cannot be found on search engines or accessed via traditional web browsers because their location and identity are hidden through encryption tools such as Tor.

Since there are various encryption tools, visitors to the site have to use the same encryption tool as the site, and most importantly know where to find the site, in order to type in the URL and access it.

Tor, now one of the main access points for the dark web, was originally created to protect military communication by hiding the IP addresses of its users.

When a user attempts to access a website using Tor, Tor bounces the request for site access to multiple computers worldwide that are maintained by volunteers.

As the request bounces around computers, the site access request is encrypted and decrypted, which means that by the time the request is processed and a user accesses the website, nobody can tell where the request came from.

This bouncing method ensures that the user's IP address, which shows their geographic location, remains anonymous.

Tor does have benevolent uses. People who live under oppressive regimes that control Internet access could use Tor to access basic blocked sites or ask for help. This could be especially useful for journalists trying to break important stories to the outside world.

Though Tor was created with good intentions, it wasn't long before people found a way to use it for more sinister purposes. Since Tor hides the location of the user, it makes tracking the user difficult, especially if they were, for instance, conducting illegal activities such as drug trafficking.

People who create illegal websites on the dark web use Tor to hide the locations of both their operations and their customers.

Why Do People Use the Dark Web?

As stated earlier, though the dark web can be used by people living under totalitarian rule to act as whistleblowers, by some estimates, over 50% of the sites on the dark web are used for criminal activities.

One of the most prevalent uses of the Dark Web is buying and selling illegal goods such as recreational drugs, weapons, fake identities, and organs.

The proliferation of cryptocurrency, which are anonymous forms of digital currency, has facilitated these sales. One cryptocurrency in particular named Bitcoin is especially prevalent on the dark web.

To the average person who doesn't use the dark web, its most dangerous use is the sale of your personal information. Hackers steal information from businesses or your personal devices that ranges from account passwords to social security numbers.

An individual’s stolen credentials can typically be sold on the dark web for $1-8 (although deceased individuals' information fetches a larger price). The more information that can be stolen, though, the higher the price criminals can ask.

Hackers make their money in bulk, which is why large companies are often targeted. However, businesses experience 4,000 cyber breaches every single day and most are against smaller businesses.

Once hackers have your credentials, they can be used for various purposes. If hackers gain your account passwords, they can access your financial information and steal your identity. Additionally, they can compromise other accounts that use the same passwords, therefore magnifying the damage.

If a hacker has the passwords to a communication tool such as your email, they can carry out phishing attacks by emailing your contacts. This can create a ripple effect, causing the information of your friends and family to be stolen as well.

If hackers access files containing sensitive information such as your social security number or medical information, they can hold the files for ransom.

While the size of the ransom depends on the value of the information and what they believe you will be able to pay, you don't want to be left in a situation where you're left trying to figure out how to pay a large sum through cryptocurrency to a stranger on the dark web.

Finally, if a hacker accesses embarrassing information such as proof of an extramarital affair or a private picture, they can expose this information simply to be cruel. In the case of the Ashley Madison hack, the hackers exposed the users' names and profiles to shame those who cheat.

Read More: Modern Day Pirates Are After Your Passwords and Are Selling Them on the Dark Web

How Can I Keep My Information Off the Dark Web?

Even if you never go on the dark web, your personal information could still be floating around on it. As a cybersecurity company, we have found more times than not, new clients often have old and current passwords sitting on the dark web, waiting to be found. Once your credentials are released on the dark web, there isn't much you can do to remove them.

However, there are various preventative measures you can take to protect your devices from hackers. For instance, change your passwords every six months. If your passwords happen to make it onto the dark web, they'll only be on there for a little while before they're eventually outdated and therefore useless, however, timing is everything. Running a dark web scan is a great way to know if your company is exposed.

Additionally, activating two-factor authentication on your devices ensures that there is an added layer of security in case hackers try to access your important accounts.

Though your credentials can be difficult to remove from the dark web, you should at the very least know if your information is on the dark web, so that you can immediately make changes to your network security.

If you are a business owner, we recommend leveraging a full dark web scan that alerts you if your credentials appear on the Dark Web. These services constantly scan for your information and alert you whenever something suspicious appears.

These alerts don’t necessarily mean a breach has occurred but they give you lead time in case a cyber-attack threat is real. We run a preliminary scan of your domain that reveals the likely source of your data breaches in the last 36 months.

Finding the likely sources of your company's data breaches helps IT companies like us identify weak points in your network that we can work to address through a comprehensive action plan.

The dark web is full of illegal activity. You have to ask yourself: "Do I want my company's personal information floating around in the same space that criminal activity thrives?"

Have any lingering questions? Read our definitive guide to the dark web.